On Friday 07.10.2016 the international exchange students from the University of Durham (Great Britain) visited an English lesson of group 05632 of the Faculty of Physics. The meeting with foreign guests was organized as part of the activities within the on-going Project aimed at the enhancement of students’ English speaking skills. It was launched in June, 2015 by the initiative of the Faculty of Physics and the Faculty of Foreign languages in Tomsk State University.
At the lesson students of physics asked the British students questions about many different aspects of their lives. They were interested in Russian stereotypes, the British education system, British TV, different accents in Great Britain and the influence of American series on British language and culture. They discussed literature, films and travelling. The British students asked about Russian films and modern writers. Lessons like these encourage Russian students to sound like native speakers. During the meeting the students had a chance to practice their skills in the English language as well as to learn some interesting facts about a student life in Durham University comparing it with the life in TSU.  Such meetings can help establish an international community between students from different universities
Фотографии: 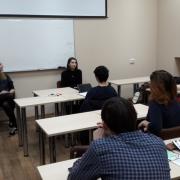 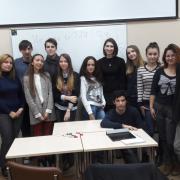